Flowerface is a feminist reimagining of the artist’s great grandmother’s life and clairvoyant story. The photographic body of work sees the artist embody the character of ‘Flowerface’, who is costumed in vintage lace and adorned mask of dried strawflowers moves throughout the images. The performative aspect of this character speaks to the Spiritualist movement and the treatment of gender and mysticism in the late nineteenth century.

In the Victorian era occultism gave birth to Spiritualism, a new religious movement with the central belief of the afterlife and spirit communication. The approach of practitioners and spectators was to employ scientific based methods to record and participate in supernatural occurrences. During this era, photographs were a common method of depicting spirits, as it was understood that the camera could act as a non-human eye that had the capacity to see more than people could ever perceive. These images were widely collected as both visual curiosities and imperial evidence to validate the Spiritualist practice.

Noting the active historical exclusion of women achieving divine communion and artistic genius, cemented a belief of female incapability. This bias coupled with an attested defamation of female mystics meant that for a brief period Spiritualism enabled women to dismantle these socially embedded prejudices. Women were able take on respected and powerful roles within society as psychic mediums. The Spiritualist movement enabled women to test their gendered boundaries through the mediation of the physical and spiritual worlds employed by the disciplines of Mystery Schools and Spiritualist circles. This era giving rise to the value and role of the female mystic, soon devolved again into female oppression as Spiritualism began to lose creditability in the late nineteenth century.

The three works act as portraits of the artist’s great grandmother, concerning her psychiatric institutionalisation after her experiences of psychic enmeshment. Unfortunately, the understanding towards these spiritually cognitive perceptions and abilities were discredited and actively misrepresented. The terrifying realities of women who were once respected and employed for their psychic abilities were then locked away; hidden within a gothic tragedy.

The photographs and the hanging silk print experiment with wet plate analogue photographic processes, establishing a discussion of inherited trauma through the history of Spiritualist photography. The artist’s personal connection to these histories of the suppressed female mystic wanders throughout the works as the ‘Flowerface’ character. The remembrance of this bygone symbolic language asks us to acknowledge the ghosts of our past and to make peace with them.

Give a brief description of the focus of this body of work/concept behind the exhibition:

Flowerface is a feminist reimagining of the artist’s great grandmother’s life and clairvoyant story. The photographic body of work sees the artist embody the character of ‘Flowerface’ as a performative allegory for the historical suppression and constraints of gender and mysticism. The photographs are an experimentation of wet plate analogue processes which aim to discuss the concept of inherited trauma through Spiritualist photography. The remembrance of this bygone symbolic language asks us to acknowledge the ghosts of our past and to make peace with them. 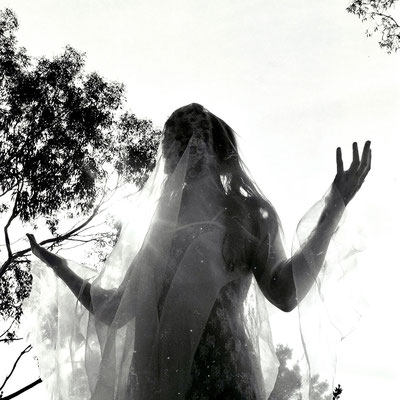 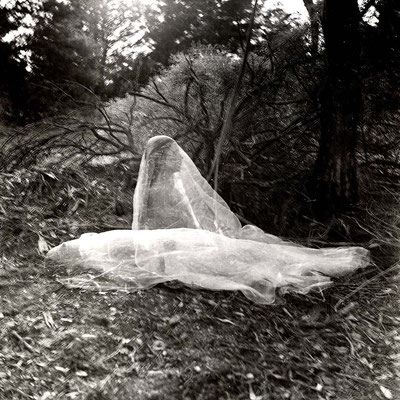